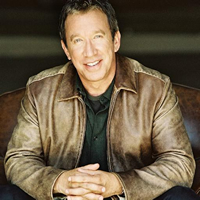 Tim Allen made his film debut in 1994, playing the historic holiday icon in the Walt Disney blockbuster hit The Santa Clause, earning him another Peoples Choice Award. He gave voice to the beloved, yet deluded space ranger Buzz Lightyear in the computer animated smash hit, Toy Story, and starred in Disneys Jungle 2 Jungle with Martin Short, and Universals For Richer or Poorer with Kirstie Alley. While the Taylor family was still at the top of the prime-time charts, Tim revisited his comedy roots with a successful national concert tour that finished with a sell-out performance at Caesars Palace, and found time to pen his first book about the male perspective, Dont Stand Too Close to a Naked Man, topping the New York Times Bestseller List. This was followed by his second bestseller Im Not Really Here focusing on midlife, family and quantum physics. In 1999, during the eighth and final season of Home Improvement, Tim was honored with the TV Guide Award for Favorite Actor in a Comedy Series, and in a tearful farewell, Tim hung up his tool belt, shifting his film career into high gear with resounding success. To the delight of moviegoers, Tim reprised his character, Buzz Lightyear in the Disney sequel, Toy Story 2 which grossed over $250 million to become the sixteenth highest film of all-time. This was followed by the popular Dreamworks film, Galaxy Quest where Tim portrayed the washed-up actor Jason Nesmith and his sci-fi alter ego Commander Peter Quincy Taggart, playing opposite Sigourney Weaver and Alan Rickman. Representing the average Joe, Tim starred in the 20th Century Fox picture, Joe Somebody opposite Jim Belushi, and in 2001 he partnered with Rene Russo in the Barry Sonnenfeld ensemble comedy Big Trouble. In 2002, with an interesting departure from playing mythical icons and the average everyman, Tim took on the role of Critical Jim, a professional hit man in the Paramount Classics comedy Who Is Cletis Tout opposite Christian Slater, and in November 2002, Tim helped kick off the holiday season, successfully reprising his role as 'the big man in red' in the long awaited sequel, The Santa Clause 2. In a brief return to television in April 2003, Tims old Tool Time pals, Debbe Dunning and Richard Karn, joined Tim on stage for the live event ABC special, Tim Allen Presents: A Users Guide to Home Improvement. In 2004, he starred opposite Jamie Lee Curtis in the Revolution Studios comedy Christmas with the Kranks. The film, directed by Joe Roth, was an adaptation of John Grishams best selling novel Skipping Christmas. Tim's latest achievement was starring in the popular ABC sitcom, Last Man Standing, for six seasons, from 2011-2017..

How to hire Tim Allen for an event

Learn how to hire Tim Allen or research availability and pricing for booking Tim Allen to perform at a corporate event, fundraiser, private party, social media campaign, fair or festival, tradeshow or conference, endorsement project, or hire Tim Allen as a guest speaker, please submit the form to our agency.

Will Tim Allen do a virtual event during COVID-19?

Many performers, actors, speakers and other talent like Tim Allen, with postponed or cancelled events due to COVID-19 are now, in certain cases, considering virtual appearances via live streaming. They perhaps may accept lower fees too. If you are seriously interested in booking Tim Allen or other talent shown on our site, we will research their desire and the specific fee for your live-streaming event or project request.

Is Tim Allen available to work my event?

Tim Allen's current work schedule and location in relation to your event's type, date, budget, and locality will play a primary factor in the acceptance of booking Tim Allen for your party. As long as your funding is commensurate with the price range to book Tim Allen, CTI will propose your event to the official agency representing Tim Allen. After we consult with them, we can circle back with you to provide a personal and accurate quote that includes: final costs, availability, and actual interest in being hired for your specific event or party.

How much is Tim Allen charging for events?

CTI can give you the Tim Allen booking price once we submit your event details to their camp. "How much does it cost to book Tim Allen for an event?" is a frequent question we get, but the final Tim Allen booking price is contingent on many variables and the booking fee we show is based on a range derived from our past experience with what will Tim Allen charge for an event. Also, their speaking fee might be different than the fee shown for the cost to perform or to just appear. Popularity, career stage, along with current demand will cause fluctuations in their speaking price too. The final booking price may be more than what is shown, but you should at least have a budget within that range for them to consider an appearance, performance or speaking engagement.

How do I contact the Tim Allen agent or manager?

CTI negotiates on behalf of professional event planners and talent buyers for paid appearances! We cannot give out direct contact information of the Tim Allen agent or help distribute fan mail, personal messages, gifts, requests for free appearances, or donations of time. The Tim Allen manager and agent will only work with us if we present them with funded offers for their client to work your event.

Can I book Tim Allen for an event at a price less than shown?

There is low probability to book Tim Allen for a party with anything substantially less than the published booking cost price range. We will negotiate with the Tim Allen agent on your behalf, but if your funding is not in place then it will more difficult to book Tim Allen, because they get many offers to work events that are at or above asking price. It is also important to consider the travel costs when researching the Tim Allen booking fee, as additional expenses like this, as well as an entourage of staff and equipment, are not necessarily built-in to the booking fee range shown. If your budget does not factor that in, then there is no benefit for them to want to be hired. We do not personally speak for Tim Allen, but in our experience in booking talent for over 25 years, this is generally the outcome of inadequate funding.
Categories
Type
Performer
Style
Comedian
Range
Actor-Golden Globe Winner, Age Group-30's-50's, Car Enthusiasts, Sells Public Event, Golf-Celebrity, Non-Pro, Comedian, Comedian-Corporate, Ready For Comedian Connect, Author, Author-Celebrity, Male
Bookmark and Share
Minimum Fee - U.S. Dates
$300,000-$499,000
Virtual Event
Call for fee
Minimum Fee - Intl. Dates
Pricing Note

CALL US TODAY (725) 228-5100 and speak with a CTI Tim Allen booking agent to get direct availability and pricing for having this talent to work your event.

With almost 30 years of industry experience working with professional event planners and talent buyers like you, we can successfully work to hire Tim Allen for a corporate event, personal appearance, corporate entertainment, speaking engagement, endorsement, private party, or wedding. For complete information on booking Tim Allen for projects like branding and promotional marketing, product or service launches, print advertising campaigns, media events, fundraisers, social marketing campaigns, and a guest appearance on TV/Movie specials including, documentaries, infomercials or voice over in video games, please call us at (725) 228-5100.

CTI will contact the Tim Allen agent, manager or representative on your behalf to inquire about the current Tim Allen booking fee and availability, while negotiating the lowest cost on your behalf. Choose CTI as your booking agency for Tim Allen to hire at corporate events, conventions, trade shows, business retreats or for television and radio commercials, voice overs, and charity events. Be advised that the Tim Allen booking price may drastically change based where spokesperson campaigns, speeches, fairs and festivals; and even a shoutout, birthday party, or private concert is located when factoring domestic or international travel. CTI agency will help book Tim Allen if the buyer has the budget and if they are interested in the event. CTI can also assist on the production requirements for Tim Allen, when needed.