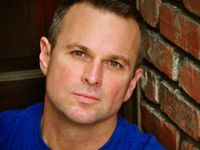 "Sam Harris’ diversified career has run the gamut from singer and songwriter to actor on Broadway, film and television to writer, director, producer and now, author. After pulling a weekly audience of more than 25 million viewers and going on to win Star Search in it's premier season, Sam and his powerhouse pop, gospel and theater influenced vocals have never looked back.

He is a multi-platinum recording artist with 9 studio CDs to his credit including SAM HARRIS and SAM-I-AM (both top 40 hits), STANDARD TIME and DIFFERENT STAGES (produced and conducted by the legendary Peter Matz, and which have been listed on numerous “Top 100 Records of All Time” lists.)

Sam has toured extensively in concert and has played to sold-out audiences at major venues including New York’s Carnegie Hall, Los Angeles’ Universal Amphitheatre, London’s West End and with The Boston Pops, has played at The White House, and participated in Cyndi Lauper’s TRUE COLORS tour. On television, Sam starred in the CBS sitcom, THE CLASS and has appeared on multiple series as well as countless television specials. He has been a guest artist on virtually every talk show from Leno to Fallon; his favorite in an historic time, when he performed a stirring “You’ll Never Walk Alone” on THE OPRAH WINFREY SHOW in the week following September 11th.

On Broadway, Sam received a Tony, Outer Critic’s Circle and Drama Desk nominations for his work in Cy Coleman’s THE LIFE as well as a Drama League Award and Drama Desk nomination for his role in Tommy Tune’s GREASE, and appeared in Mel Brook’s, THE PRODUCERS. He starred in JESUS CHRIST SUPERSTAR, CABARET, JOSEPH AND THE AMAZING TECHNICOLOR DREAMCOAT, HAIR, PIPPIN, THE JAZZ SINGER, THE FIRST WIVES CLUB, SCHMOOLI & MINNOOLI (with Liza Minnelli) and the smash hit, one man show SAM.

Behind the scenes, Sam co-wrote the TBS sit-com, DOWN TO EARTH, which ran for 4 years. He also co-produced the PBS television special LOVE LETTER TO NEW, supervised and directed segments of MICHAEL JACKSON’S 30TH YEAR ANNIVERSARY at Madison Square Garden, and co-wrote LIZA’S AT THE PALACE, which won the 2009 Tony Award; and created and directed the concert event, NEW YORK’S FINEST – BROADWAY’S LEADING MEN.

In an exciting new chapter of Sam’s career, his first book, “HAM: Slices of a Life” (Gallery Books/Simon & Schuster) was released in January 2014. HAM is a collection of stories and essays on everything from growing up in Bible Belt Oklahoma to show biz, celebrity, and his family life as a husband and father. He has fashioned a hilarious and poignant one-man show of the same title, which has toured in major cities throughout the country. Both the book and the show are receiving rave reviews in publications from The New York Times to People Magazine, Esquire, and many more.".

How to hire Sam Harris for an event

Learn how to hire Sam Harris or research availability and pricing for booking Sam Harris to perform at a corporate event, fundraiser, private party, social media campaign, fair or festival, tradeshow or conference, endorsement project, or hire Sam Harris as a guest speaker, please submit the form to our agency.

Will Sam Harris do a virtual event during COVID-19?

Many performers, actors, speakers and other talent like Sam Harris, with postponed or cancelled events due to COVID-19 are now, in certain cases, considering virtual appearances via live streaming. They perhaps may accept lower fees too. If you are seriously interested in booking Sam Harris or other talent shown on our site, we will research their desire and the specific fee for your live-streaming event or project request.

Is Sam Harris available to work my event?

Sam Harris's current work schedule and location in relation to your event's type, date, budget, and locality will play a primary factor in the acceptance of booking Sam Harris for your party. As long as your funding is commensurate with the price range to book Sam Harris, CTI will propose your event to the official agency representing Sam Harris. After we consult with them, we can circle back with you to provide a personal and accurate quote that includes: final costs, availability, and actual interest in being hired for your specific event or party.

How much is Sam Harris charging for events?

CTI can give you the Sam Harris booking price once we submit your event details to their camp. "How much does it cost to book Sam Harris for an event?" is a frequent question we get, but the final Sam Harris booking price is contingent on many variables and the booking fee we show is based on a range derived from our past experience with what will Sam Harris charge for an event. Also, their speaking fee might be different than the fee shown for the cost to perform or to just appear. Popularity, career stage, along with current demand will cause fluctuations in their speaking price too. The final booking price may be more than what is shown, but you should at least have a budget within that range for them to consider an appearance, performance or speaking engagement.

How do I contact the Sam Harris agent or manager?

CTI negotiates on behalf of professional event planners and talent buyers for paid appearances! We cannot give out direct contact information of the Sam Harris agent or help distribute fan mail, personal messages, gifts, requests for free appearances, or donations of time. The Sam Harris manager and agent will only work with us if we present them with funded offers for their client to work your event.

Can I book Sam Harris for an event at a price less than shown?

There is low probability to book Sam Harris for a party with anything substantially less than the published booking cost price range. We will negotiate with the Sam Harris agent on your behalf, but if your funding is not in place then it will more difficult to book Sam Harris, because they get many offers to work events that are at or above asking price. It is also important to consider the travel costs when researching the Sam Harris booking fee, as additional expenses like this, as well as an entourage of staff and equipment, are not necessarily built-in to the booking fee range shown. If your budget does not factor that in, then there is no benefit for them to want to be hired. We do not personally speak for Sam Harris, but in our experience in booking talent for over 25 years, this is generally the outcome of inadequate funding.
Categories
Type
Performer
Style
Pop
Range
Broadway, TV Show, Medical Issues, Medical-Aids Hiv, Social Issues, Social-Animal Diversity, Jazz, Jazz Standards, Pop, Pop Style, Pop Adult Contemporary, Theatrical, Theatrical Broadway, Author, Author Celebrity, Medical Issues, Medical Issues Aids/Hiv, Social Issues, Social Issues Diversity, Social Issues Gay & Lesbian, Does Virtual Events, Male, Age Group-All Ages, Age Group-60's+, Age Group-30's-50's
Bookmark and Share
Minimum Fee - U.S. Dates
$7,500-$14,999
Virtual Event
Call for fee
Minimum Fee - Intl. Dates
Pricing Note

CALL US TODAY (725) 228-5100 and speak with a CTI Sam Harris booking agent to get direct availability and pricing for having this talent to work your event.

With almost 30 years of industry experience working with professional event planners and talent buyers like you, we can successfully work to hire Sam Harris for a corporate event, personal appearance, corporate entertainment, speaking engagement, endorsement, private party, or wedding. For complete information on booking Sam Harris for projects like branding and promotional marketing, product or service launches, print advertising campaigns, media events, fundraisers, social marketing campaigns, and a guest appearance on TV/Movie specials including, documentaries, infomercials or voice over in video games, please call us at (725) 228-5100.

CTI will contact the Sam Harris agent, manager or representative on your behalf to inquire about the current Sam Harris booking fee and availability, while negotiating the lowest cost on your behalf. Choose CTI as your booking agency for Sam Harris to hire at corporate events, conventions, trade shows, business retreats or for television and radio commercials, voice overs, and charity events. Be advised that the Sam Harris booking price may drastically change based where spokesperson campaigns, speeches, fairs and festivals; and even a shoutout, birthday party, or private concert is located when factoring domestic or international travel. CTI agency will help book Sam Harris if the buyer has the budget and if they are interested in the event. CTI can also assist on the production requirements for Sam Harris, when needed.